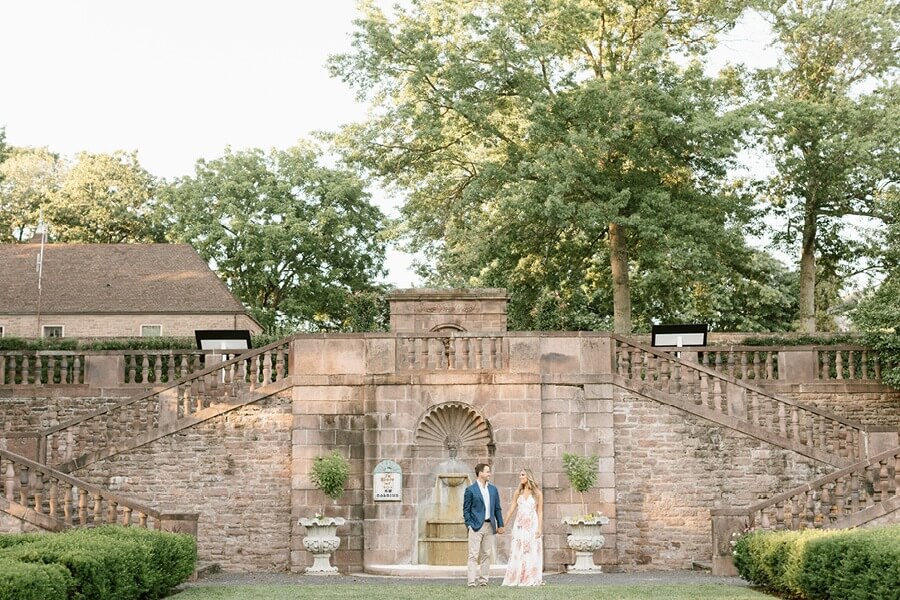 Be prepared, just roll with it, and be flexible — all good tips when planning any wedding-related festivities, particularly during a year in which the world’s projected to see more Big Days than in the past three decades. So this couple was smart when they booked their wedding venue, Parque Ridley Creek, before even getting engaged. They’ll say “I do” next month. But first, a look back at how the groom popped the question and their Tyler Gardens engagement-photo session, with imagery by Emily Wren.

The couple: Kristen Konski, in business operations management for Jaguar Land Rover, and Stephen Keller, a tech sales professional at Salesforce, both 33, of Hoboken

How they met: Kristen and Stephen have Kristen’s friend Jeana to thank for bringing them together. Jeana had recently started a job at Salesforce, where Stephen worked. After Jeana found out he was single and fit her pal’s “type,” she convinced Kristen — a former New York Jets cheerleader who was teaching at the Bar Method at the time — to give him a chance. Despite her hesitancy (Kristen was jaded after too many bad relationships), she let Jeana share her number with Stephen, who reached out for a date.

It took a few weeks to get it on the calendar — Kristen says that time in her life was akin to the film 27 Dresses, filled with friends’ bachelorette parties, bridal or baby showers, and weddings — but that first date at Soho House in NYC was the start of forever.

Their proposal story: The duo dated for a little over a year before Stephen proposed in October 2020. “The pandemic didn’t really allow him to keep too many secrets,” says Kristen. “I knew exactly when he was getting my engagement ring. However, he was really great at hiding just how he planned to do it.” Indeed: He convinced Kristen they should do a staycation in NYC over Halloween weekend (her favorite holiday) at Soho House, complete with a festive rooftop brunch. Of course, the roof was empty of revelers — aside from the two of them and a bottle of champagne.

A plot twist: Kristen and Stephen had actually booked their wedding venue a month before getting engaged — but such pre-planning wasn’t out of the norm for them. “Anyone who knows Stephen and me knows we’re very business-oriented,” says Kristen. “We love logistics and like to make sure all details are covered and in place in every aspect in our life. Our wedding was no exception.” The second venue they looked at was Parque at Ridley Creek; they immediately fell in love with its grounds, mansion and setup. They began inquiring about dates and soon found that 2021 was entirely booked by 2020 couples who had been impacted by the pandemic. As for 2022, only one date was available: June 11th. “We signed our contract that day,” says Kristen.

As for the engagement photos: There was an unforeseen turn of events here, too. Because Kristen grew up in Bucks County and wanted to have their engagement session in “a place that captured the beauty of home,” the pair had initially set their hearts on Longwood Gardens. But inclement weather and schedule conflicts prevented that, so they had to find a new location. They settled on Tyler Gardens after a suggestion from Kristen’s mother, who had attended Bucks County Community College (where the venue is) and had spent many days studying or eating lunch amid the picturesque place.

The attire: Because the scenery at Tyler Gardens is so beautiful, the couple chose to keep their looks timeless and simple — and nod to their blush, ivory and gold color scheme. Kristen donned an A-line ivory maxi dress with pink florals. “I didn’t want to go with anything too stylish as trends fade and don’t always photograph well.”

Stephen donned khakis, a white button-down and a blue blazer.

A final wedding note:  The pair has this to say about their upcoming nuptials: “Just like the past two years, our planning process was unconventional and anything but normal.” But here at Philadelphia Wedding, we think unique approaches make the best stories — and we’d love to hear yours, too.